It was love at first sight. Well almost, there were way too many people all over you when I first got off the train.  But once I broke away from the crowds and I really saw you, the connection was real. Amsterdam, you are most definitely the most beautiful city I have ever seen. And damn it, I loved every moment I spent getting to know you.

We started our Eurotrip in Frankfurt, Germany, but decided to leave a couple hours early to maximize our time in Amsterdam. It was probably the best decision we made on this trip. I would have loved even more time to explore this absolutely stunning city. I mean, just look at this shot:

We arrived into the Amsterdam Centraal station. After getting over the shock of paying 1 Euro to use the restroom, we were completely in awe of the neo-gothic structure. We later learned that the station sees 260,000 travelers each day – an amazing stat when compared to Chicago’s Union Station which greets just about 120,000.

When you depart from Amsterdam Centraal Station, you’re immediately immersed into the terrifying game of frogger that is navigating Amsterdam streets. With more bikes than people + more tourists than residents, each cross walk requires careful attention as you cross through walkers/runners, bikers and oncoming traffic (from both directions).

Amsterdam is very recognizable in photographs and film due large in part to it’s many canals. Similar to Venice, Amsterdam’s network of waterways are more prominent than city streets. There are 165 canals in Amsterdam with a total distance of almost 60 miles. Unlike Venice, the canals are not a primary method of transportation. How do Amsterdammers get around? Bikes of course! There are 2.3 bikes for every person in the city of Amsterdam + every good tour guide will share that an estimated 25,000 bikes are found in the canals each year.

So all the aforementioned was enough to make me fall in love. But, then there were houseboats. 2,500 of them. Mostly inhabited by residents, these houseboats line the canals and each feature a unique character of their own. I was totally smitten with the houseboats and will definitely opt for staying in one  during my next visit (there are some available for overnight guests on AirBNB).

I’ve got to give a shout out to Christo our tour guide for providing me with all the facts I’ve shared with you thus far [I did some fact checking on Google + his facts are legit]. Taking a canal cruise was definitely a good choice. It allowed us to learn all about the city from a local, take in a new perspective and cut down on Chuck’s inflicted blisters.

Among Christo’s many teachings, we learned about the pulleys at the top of almost every single building in Amsterdam. As the buildings were originally built as a warehouses for traders, the pulleys allowed the workers to pull cargo from boats in the canals into the higher level windows for sorting and organizing.

The famed flower market was once upon a time located here because it was easiest for the growers to transport the flowers by waterway. Many of the market stands are now permanent fixtures but the flowers are still transported here from the fields via boat. We didn’t make it out to the tulip fields – but I will definitely have this on my list for the next visit.

The “Dancing Ladies” are a collection of buildings along the canals that lean against each other, appearing as some fancy [slightly intoxicated] ladies dancing the night away. These little ladies made for my favorite photograph from this entire trip.

Toward the end of the tour, we came across this canal side restaurant packed with locals + tourists drinking Heineken and snacking on cheese plates. I really wanted to join them, but we were holding out as we were hoping to get seconds on the best burger in the world after getting off the boat. 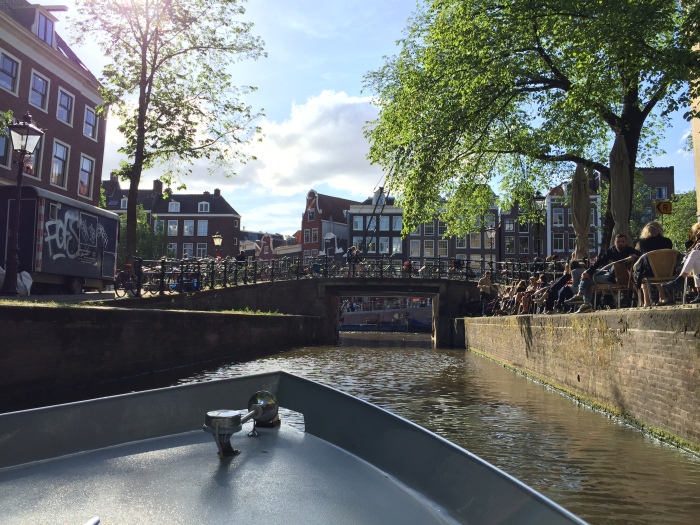 I mentioned the best burger in the entire world is in Amsterdam. If Katy wasn’t right there with me I might not believe my own taste buds at how absolutely phenomenal this burger was. But she too insists that it was the best burger ever. We spent quite a significant amount of time trying to track down this burger for a second helping. None such luck as we have no idea where we were when we stumbled upon this joint.

These two photos are our only clues. [Help! We must find this burger heaven again!]

UPDATE: With the handy-work of a techy friend who read the blog before his trip to Amsterdam, the location of this outrageously ridiculous good tasting burger has been found! Jutichai V. – you are a gentleman and a scholar. If you’re heading to Amsterdam, there is absolutely no acceptable reason why you should skip having a burger at Cafe Binnen Buiten!

When we gave up on our quest, we decided to head to another praised burger hot spot Cannibale Royale. I had Le Classique [Angus beef, English cheddar, sauteed onions + crispy bacon] which was pretty darn good. At 8.5 Euro, the price point wasn’t too bad either. My favorite part of this dining experience though was the hunky bartender who laughed at us for trying to order Heineken. We were happy to learn that he took craft brews so seriously + seriously enjoyed our Amsterdam craft blondes. 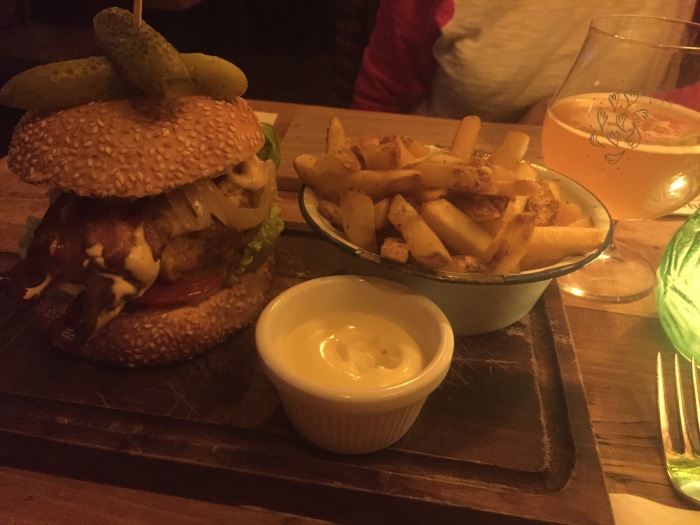 Katy found a rooftop which was reviewed as the best views in Amsterdam. The SkyLounge was located on the roof of the Double Tree Hotel and the views didn’t disappoint. Situated just next to the Amsterdam Centraal Station, it’s just high enough for a nice bird’s eye view of the city.

The super movie fan in me couldn’t forego a visit to this special bench from the movie The Fault in our Stars. Although the original bench was stolen after the movie was released [strange people], it’s been replaced and tagged with initials of lovers and even some love locks.

Amsterdam, you are everything. We will see you sometime soon. Iamsterdam.

8 thoughts on “Amsterdam [I Fell So Hard For You]”